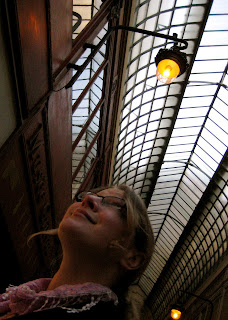 Thanks for this opportunity to contribute, Michael.

Harm, Hillary Gravendyk (Omnidawn, 2011)
Everything riots and
unspools, the whole room on one side and all the sound winking out.

Birds of Tifft, Jonathan Skinner (BlazeVOX, 2011)
the stem's left to rust
in stagnant water, twists
of matter, dust and lanes

Personification, Margaret Ronda (Saturnalia, 2010)
There was a tiny pain then, stab of glass catching sun-glare. It shuts you up. To think of it as a wall, too steep to scale, and someone on the other side shouting.

The Distribution of the Insensible, Nathan Brown (http://distributioninsensible.tumblr.com/)
...another Iraq War veteran suffered a ruptured spleen from being beaten with batons.It seems the domestic army of the American Empire is now tasked with destroying the bodies of its imperializing counterparts the moment they come home from war, disenchanted. (From “On the Night Before the Morning, All Power to the Communes.”)

The Ecological Thought, Timothy Morton (Harvard University Press, 2010) and “Some Outlines for Art in the Time of Hyperobjects,” Morton (http://ecologywithoutnature.blogspot.com/).
Hyperobjects invoke a terror beyond the sublime, cutting deeper than conventional religious fear…

[“Hyperobjects”] loom uncannily towards us, getting stranger by the minute. All our representations are inadequate.

Corpus, Jean-Luc Nancy (Fordham University Press, 2008 [English])
Bodies don’t take place in discourse or in matter… They take place at the limit, qua limit: limit—external border, the fracture and intersection of anything foreign in a continuum of sense, a continuum of matter. An opening, discreteness… The body is a place that opens, displaces and spaces phallus and cephale: making room for them to create an event (rejoicing, suffering, thinking, being born, dying, sexing, laughing, sneezing, trembling, weeping, forgetting…). (From “Aphallus and Acephale.”)

“Critique of Violence,” Walter Benjamin (Schocken, 1986 [English])
[In] the exercise of violence over life and death more than in any other legal act, law reaffirms itself. But in this very violence something rotten in law is revealed.

Other important theory discovered in 2011:
“Thou Art My Sister: Physico-Theology and the Peopling of Nature,” Joanna Picciotto (unpublished paper).
“Misery and Debt On the Logic and History of Surplus Populations and Surplus Capital,” Aaron Benanav and Endnotes (Endnotes 2, April 2010).
Active Boundaries: Selected Essays and Talks, Michael Palmer (New Directions, 2008).
After Finitude: An Essay On The Necessity Of Contingency, Quentin Meillassoux (Continuum, 2008).

Ethics: An Essay on the Understanding of Evil, Alain Badiou (Verso, 2002)

“The lived world is not a nice world to be lived in. It’s a highly disputed world to be in. Once we get our materialism back, we also get back war, because the lived world…is uninhabitable.”

—Bruno Latour, 20 October 2011, “Is It Possible to Get Our Materialism Back,” Johannes Gutenberg-Universität Mainz, Germany (I am happy to share my notes from this Latour talk; write to me at angelamariehume@gmail.com.)


“The kind of subjectivity I am interested in is that of the underground pool, the wild mess, the common water from which we all draw. That’s where the poet’s relationship to the materials goes in. Ecopoetics is not just about individual lives. It’s about a collective unconscious—the coming together of all the sentences and images we have experienced.”

—Brenda Hillman, 20 March 2011, on “ecopoetics,” Point Reyes Station, California.
Posted by The Disinhibitor at 12:24 AM