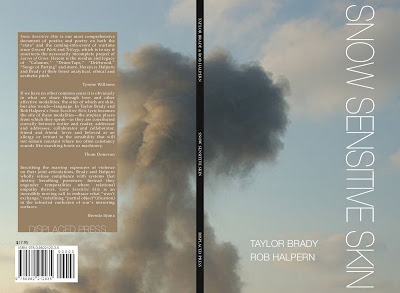 I've somehow neglected to officially announce the reissue of Rob Halpern and Taylor Brady's Snow Sensitive Skin, orginally published by my Atticus/Finch in 2007 and now available as a trade edtion thanks to Displaced Press. The new edition features a plethora of supplemental material, including workng texts by both Taylor and Rob and an afterward, "Collaboration, Gesture, and Improvisation," collaboratively written by both authors. In addition, I was asked to contribute a preface, which I append here as an introduction to the project. Here goes:
I first discovered Taylor Brady’s work after a memorable conversation at Small Press Traffic circa 2002. Brady made some trenchant comments about the work of noise—how distortion too falls prey to the whims of capital unless it succeeds in reconfiguring the frames of legibility around it: that to be noise it must remain noise. I was struck then by how decisively Brady honed in on the value of the negative, especially because, post-9/11, everyone wanted to make noise but nobody seemed to know how against the din of rhetoric and sophistry and predator drones washing over our impotent negations in waves of terror and abjection.
After our discussion, I immediately located and devoured Brady’s first volume, Microclimates, and while I must have registered Rob Halpern’s name on the back cover, I didn’t thoroughly investigate his work until after leaving the Bay Area to enlist in the Poetics Program at SUNY Buffalo, which seemed like the logical place to ferret out the riddle of praxis. I invited Taylor to visit once settled, a trip roughly coincident with the publication of Halpern’s first book Rumored Place, and Brady’s praise of the project was so effulgent that he sent me fairly breathless to the bookstore down the street, where I found it rhyming with the concerns of Microclimates, an autonomous critical ecology—a rupture (rapture?) of possibility by which reader, writer, and (coming-)community could imagine a critical engagement that will have been the conditions for a possible future.
Both poets seemed to write, in the words of Fritz Breithaupt (after Walter Benjamin), an “empty space (as) the condition of possibility of (their future) arrival,” and both offered an impassioned model of praxis translating perfectly into the material practice itself, an engagement gleaned from the New Narrative mentors they share, and where, no doubt, they learned to deftly move between poetry, prose and critical exegesis.

So perhaps my interest in commissioning what would become Snow Sensitive Skin was more conspicuous than I imagined at the time. I was curious to learn how their voices would coalesce—what of shared aesthetic concerns, political commitments, and countless hours of conversation would find its way into the work. But in the end, I was interested in what I (and Rob and Taylor) would learn from it (and each other) and how we might “occupy” the foreclosed “now” as artists and thinkers—how we might use invitation as a model to engage. And this is precisely, in my estimation, what Snow Sensitive Skin offers its readers.

I invited Rob to visit Buffalo not long after Taylor, in September of 2005, and after his return to California I asked the two to collaborate. The terms were simple: commit to a project together—no deadlines, no injunctions as to form or content; I committed to print the collaboration with Atticus/Finch sight unseen, if and when it manifested. It seemed to me then that such a communal endeavor would test the stakes of collective engagement, and I wanted to take Breithaupt at his word that emptying the space of possibility “is all that is needed.” I’m not sure when they began working in earnest, but throughout 2006 I received emails in fits and starts while both worked on other writing projects and dissertations and maintained relationships, and then, suddenly, in the spring of 2007 the project had a title. By November, two years after the invitation to begin, the book saw publication.

The complexities of this particular collaboration are difficult to suss out, even for those intimately involved, so I can’t speak to what happened when Brady and Halpern sat down to work (though it is crucial that they did so in person). Even in close communication, I couldn’t decipher who wrote what and under what circumstances, though I certainly have some hunches. My guess is the project truly found its legs with the addition of a fourth collaborator: the Lebanese musician and visual artist Mazen Kerbaj, and I suppose, by default, a fifth: Israel’s aerial bombardment of Lebanon in the summer of 2006. During the “July War,” a 34-day siege that left over 1,000 residents of Beirut dead, Kerbaj met the “summer rain” of missile attacks with the kind of anxious inefficacy we all felt (feel) under the reign of the industrial military complex. Through the barrage he began a blog, posting cartoons and music in an effort to document his rage, vitiation, and guilt. He posted his own collaboration, “Starry Night” a “minimalistic improvisation” for trumpet and bombs in which he played his horn with, between, and against the percussive explosions of Israeli artilery. In a way, it is precisely this sense of “collaboration” (collaborating with and against), that informs Snow Sensitive Skin, this improvisation with a summer rain we both precipitate and endure.

Through Kerbaj’s daily practice of attending to the violence of the present using the tools at his disposal, Brady and Halpern ask the question (in “City Made of Boxes”) “can we even be here now?” What can a writing look like in which “a thing records the conditions of its own inscription” (Rumored Place) in order to see itself seeing? What kind of time will have been the moment of rupture in which the possibility of a future is not coincident with its own destruction? In some ways, the terms of engagement and the consequent space produced through the very existence of these terms allows for a tentative response. By working closely together, we created a space to let our thinking exist in a state of inoperativity. We didn’t know what this project would be, and as such we allowed it to become what it will have been, without deadline or marketing interests or the more practical exigencies of publication. We decided to let the project develop on its own, despite the contingencies of everyday responsibility, and the outcome did more for my thinking than I could have imagined in the most optimistic of scenarios.

The authors write in their acknowledgments “we want to give ourselves to a present that is something other than the debased ‘now,’ and to a future that will not have been terminal” in which “we find / ourselves still trying to link our language (what they call a “second language…taken up as an act of love”) to the / thing that happened when all our stacked vocal / harmonies tumble into public spheres.” It is this new historiography, not the “metal time we’re fed by others,” that allows us to exist next to how we find ourselves, embroiled and abject. It is no accident that the most frequently used words in Snow Sensitive Skin (after requisite prepositions and articles) are “we” and “our.” I am grateful to count myself part of this possible plural, even if we have yet to fully understand the conditions of our redemption.
Posted by The Disinhibitor at 12:07 AM