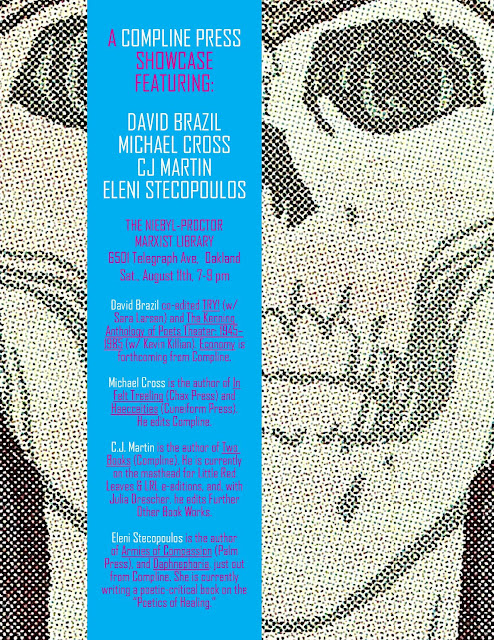 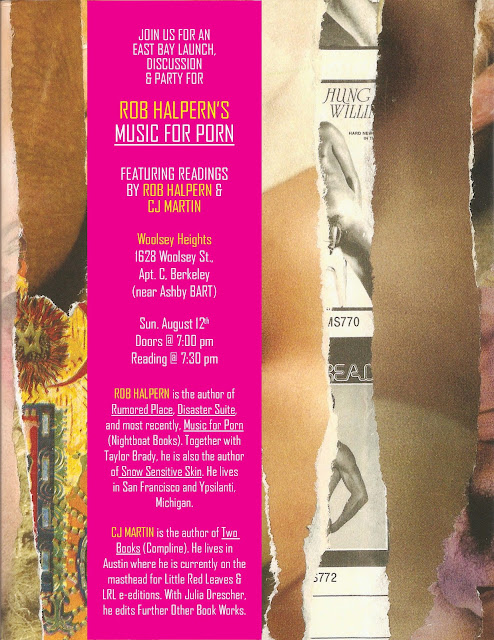 I'm very excited to be curating a weekend of events in mid-August as something of a last hurrah before the baby comes! If the baby does come, however, before or during (!!) these events, poet Sara Wintz promises to host in my stead!

First, I'm putting together a little Compline showcase on Saturday, August 11th at the Niebyl-Proctor Marxist Library in Berkeley (in coordination with the weekend's Free School activities) featuring David Brazil, CJ Martin (visiting from Austin), Eleni Stecopoulos and myself; Compline books will be on hand, including Eleni's remarkable new chapbook Daphnephoria and CJ Martin's Two Books, and Brazil will read from the Economy project, which we'll publish in early 2013.

Please spread the word, and I hope to see you at one or both of these events!
Posted by The Disinhibitor at 2:35 AM No comments: 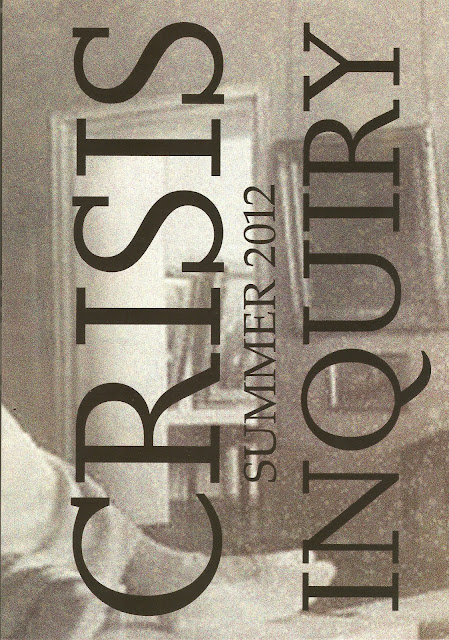 This anthology is SO HUGE: in size (over 300 pages of material!!), scope, and content! New work by John Wilkinson, Laura Kilbride, Andrew Rippeon, Brenda Iijima and myself, along with a complete reprinting of the Frances Kruk chapbook I wrote about here, a HUGE feature on Rob Halpern (featuring the complete "pornotopias" material and critical writing by Thom Donovan, Kevin Killian, Tyrone Williams, etc.), and another huge feature on Keston Sutherland (with a Sutherland checklist to boot!). Rich Owens' editorial notes are worth the price of admission alone. Along with the release of Halpern's Music for Porn and Stacy Doris' totally overwhelming Fledge, this project is one of the big books of the year! Kudos to Owens for the incredible amount of work that went into this document, and to all the contributors for upping the ante on what an anthology like this can be!! This is the return of the yearbook...BUY IT NOW!!!!
Posted by The Disinhibitor at 11:30 PM No comments: 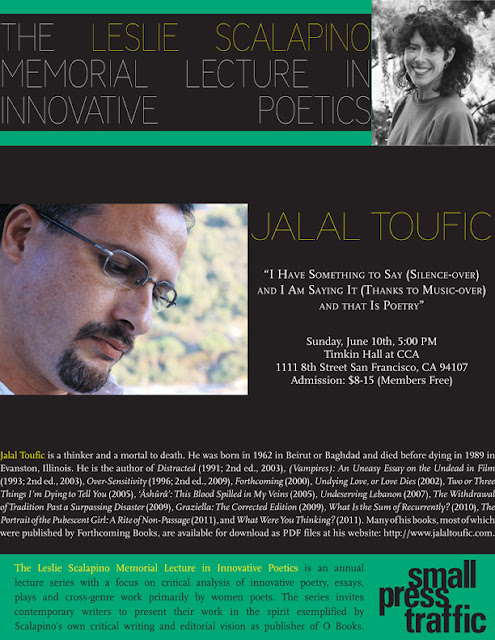 The following is my introduction to the 2nd Annual Leslie Scalapino Memorial Lecture featuring Jalal Toufic. Unfortunately, there is no video of the lecture as Toufic did not want to be filmed, but the conversation was pretty spectacular! Below, I make a concerted effort to connect the trajectory of Scalapino and Toufic's projects (though I'm not certain I was successful!). Here goes:

One of the decisive highlights of my time spent in the Buffalo Poetics Program was hearing Leslie Scalapino deliver a paper entitled “Fiction and The Present Without Basis,” ostensibly a response to the scholarly journal symploke about the future of narrative. The editors asked “Does fiction continuing the tradition of modernist innovation have any reality for emergent political groups and cultures?” and “Can the novel establish itself in the present of global capitalism without abandoning its formal distinctness?” Scalapino curiously responded by taking Jalal Toufic as her subject, locating in his conceptual interweavings “the ‘destruction’ of action and experience as a basis of writing."
In Leslie’s own work, reclaiming a stake in “authentic” experience through the space/time of language occurs by “destroying action and experience,” “crushing syntax,” and “poking holes in reality”; in other words, language physically remakes our experience of ourselves by further abstracting the complexities of mind-action from the illusions of “reality” (including, of course, the often violent and oppressive modes of coming-to-know which include taxonomies of legibility and reason). Since, Scalapino claims, language as pure potential has been utterly desiccated by “propaganda and lie(s),” “poetry or fiction is the only language that can destroy language in that sense (to remake it)." As such, reclaiming the power of the word is a kind of resurrection: for language to “transform the time it’s in” to gain new life as “syntax and structure in that time,” one must change the “space given as that language there, which rearranges changing the conception (present tense) of the outside given.” In other words, the poet attacks fiction with fiction in order to track the almost imperceptible overlap between spurious landscapes of self and social and social-self.

In “The Withdrawl of Tradition Past a Surpassing Disaster,” Toufic argues that “resurrection takes (and gives) time” perhaps tantamount to “the time of Chernobyl” in which, in Jean Luc Godard’s King Lear, “everything disappeared, everything, and then after a while, everything came back, electricity, houses, cars—everything except culture and me.” The temporality of resurrection is a space/time in which a community comes to understand its contours by investigating what is no longer accessible to it as a collective, what has withdrawn, using Toufic’s conceptual vocabulary, past a surpassing disaster. The time of resurrection is the space of fidelity to a potential that is no longer operative but often masquerades as what’s ready at hand. And for Toufic “one of the surest ways to detect whether there’s been a surpassing disaster is to see when some of the most intuitive and sensitive filmmakers and/or writers and/or thinkers began to feel the need to resurrect what to most others…is extant and available.”

Leslie Scalapino was one of our most “intuitive and sensitive” barometers—a poet who spent a lifetime resurrecting a relationship to experience and phenomena that, while “seemingly extant and available” to others, was really inundated and mollified in the service of capital. Her writing both takes and gives time in its retrieval of the tacit potential of inoperativity as a “conceptual ‘rim’ or horizon-line…of concentration,” “(the) practice of deconstructing as a…line in space which one ‘reads’ before one: on which the inside of the inside (perception, physical seeing) and the outside of the outside (events, sights) occur, both as if at once on that conceptual line in space…”

It took some time to understand why Leslie choose Jalal Toufic as the poster child of fiction’s future, especially because, while an eminently accomplished and prolific writer, artist, filmmaker, and teacher, he is patently not a fiction writer, or at least not in the traditional western sense. But in “Fiction’s Present” she locates a kindred spirit whose “intent is to perform the space of our being the realm of the undead because it is the present,” and who presents “anti-fiction-self-portrait as fiction, the experience of suffering a double.” In his own quest to resurrect tradition past a surpassing disaster Toufic has penned a handful of now-classic texts, including Distracted, (Vampires): An Uneasy Essay on the Undead in Film, Over-Sensitivity, Forthcoming, Undying Love, or Love Dies, and Two or Three Things I’m Dying to Tell You, along with newer works including Undeserving Lebanon and What is the Sum of Recurrently (both of which are available for download at his website). As a “thinker and a mortal to death,” Toufic continues to make the resurrection of possibility the telos of thought, and like Leslie, pokes holes in the present to help us peek through shifting landscapes of the ready-at-hand to find abeyant possibility in the praxis of the everyday.

(All quotes from Leslie Scalapino are derived from "Fiction and the Present Without Basis," used with permission of the Estate of Leslie Scalapino).
Posted by The Disinhibitor at 8:10 PM No comments:


If you have a moment, take a look at the very nice write-up of The Feeling is Mutual: A List of Our Fucking Demands over at HTML GIANT (thanks, Ben Mirov!).  The reviews are in! The reading public is going gaga for this benefit anthology, and you can too (go gaga, that is!) by clicking the "Buy Now' button below! By donating $10 to Small Press Traffic, you're helping to fund an entire season of poetry events in the Bay Area (while scoring a badass anthology with an awesome letterpress cover to boot!)...

Posted by The Disinhibitor at 11:11 PM No comments: 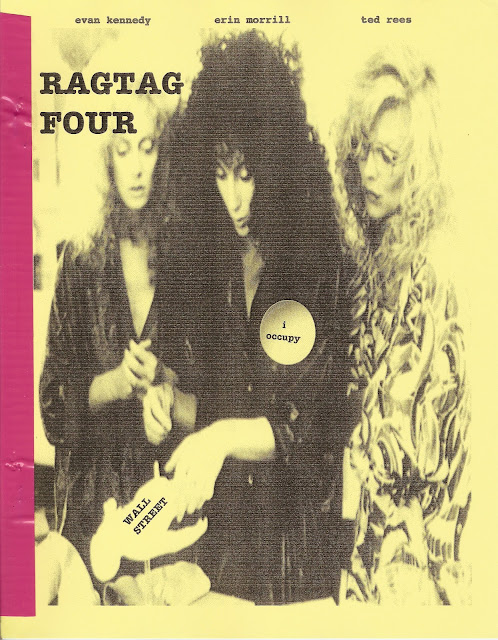 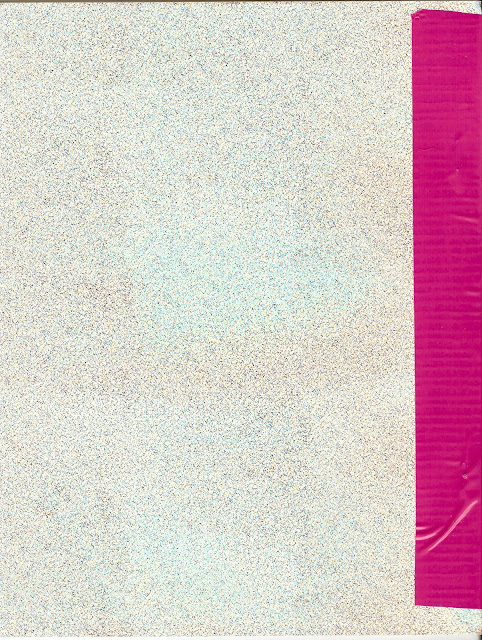 I'm totally playing catch up in documenting the many things I've loved these past few months; one mag in particular is always a personal favorite, and this issue is no exception: I totally heart Monica Peck's super low-fi and totally mighty RAGTAG. I'd like to believe she made this issue specifically for my class at USF, as I asked for something to distribute to students and this one showed up in my mailbox, but either way, this was a big hit in class! New work from Evan Kennedy, Ted Rees, and Erin Morrill, featuring totally shimmery psychadelic back pages with hot pink duct tape for binding (the tape color changes for each issue). As far as I know, these are always free, so interested parties should send Monica an email at peckmonica (at) gmail. I get the sense that simply showing interest is payment enough for Peck, so send love her way so she keeps this crucial enterprise going. The Bay Area is running low on critical ecologies like this...
Posted by The Disinhibitor at 11:39 PM 1 comment: