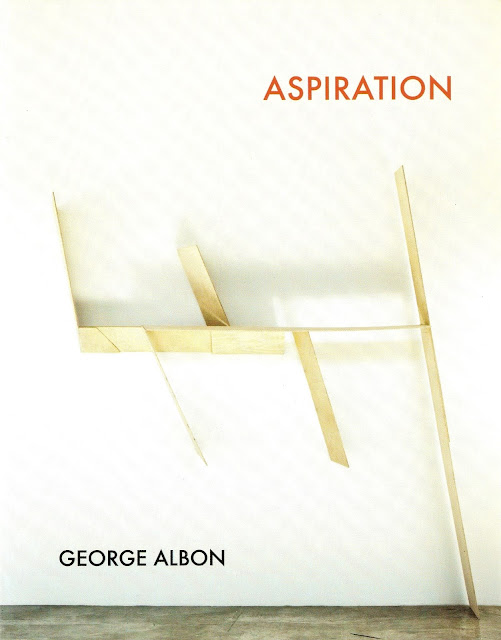 ﻿
﻿
I've been anticipating the release of this volume for a long time: the first publication of George Albon's sprawling, multi-volume publication Café Multiple, a project that marries poetics, devotion, and cultural history. I'm really excited about the possibility of this project as a model for critical-cum-creative writing to come...

While this is billed as a "chapbook," it has a spine, an ISBN number, and clocks in at 72 pages, so it's certainly substantial. This is the first in a four-part section (which constitutes only 1 of 10 sections of the larger Cafe Multiples project!), to be followed by Practice, Immanence, and Migration. Pick it up through Omnidawn here, and check out George's meditation on the lyric below:

"The lyric is emergent—gestural or suggestive—rather than substantive or complete. The lyric is an urge towards the future based upon an appetite in the present. The lyric is an intermediate world that shows itself fugitively, as an opening of shutters that immediately close up, and makes itself felt as a dimension of being surprised, a disturbance, a fissure, an obstacle, a stumbling upon that reveals a beyond, and by which the subject feels overwhelmed. The lyric seems to offer a powerful condensation of emotional and identity linkages—specifically, a certain interface between abjection and defiance. The lyric incorporates antagonistic perspectives without explaining any of them away, and also without reconciling them in a spurious sublation or higher unity. The lyric is both at fresh creation of spacetime and an immediate perishing. The lyric is an ecological production of actual togetherness, where ecological means that the aim is not toward a unity beyond differences, which would reduce those differences through a goodwill reference to abstract principles of togetherness, but toward a creation of concrete, interlocked, asymmetrical, and always partial graspings. The lyric is the thunderbolt observed about the attraction of amber and the Heraclean stones. The lyric struggles actively with the given bodily code for material accumulation until it surrenders, as well, some of its immemorial meanings of the accumulation of spiritual, physical, sexual, and intellectual power. The lyric is a process whereby individuation creates a relational system that holds together what prior to its occurrence was incompatible. Alongside the connective synthesis of flows and cuts, the lyric is a disjunctive synthesis of routes and permutations. The economy of production is supplemented in the lyric by an economy of circulation and distribution. This supplemental economy corresponds to a torsion in the field of desiring production. The lyric is a schizophrenic clattering. The lyric becomes ranges not determinants. It cannot be presented directly, or re-presented; but its very indeterminacy is a perfectly positive, objective structure which acts as a focus or horizon within perception. The lyric is a relatedness backward or forward. The lyric is a flight of valuable qualities. The lyric is the emanation of something that makes itself known but conceals itself in the appearance. The lyric offers itself to be felt by other entities in its own turn, so that it is referent beyond itself. What is peculiar to the lyric is the fact that questioning becomes lucid in advance. The lyric does not prefigure the actualities that emerge from it. Rather, it is the impelling force, or the principle, that allows each actual entity to appear (to manifest itself) as something new, something without precedence or resemblance, something that has never existed in the universe in quite that way before. The lyric converts its exclusions into contrasts. The lyric is not "observed," it is there in a heedful adjustment."
Posted by The Disinhibitor at 12:00 AM No comments: