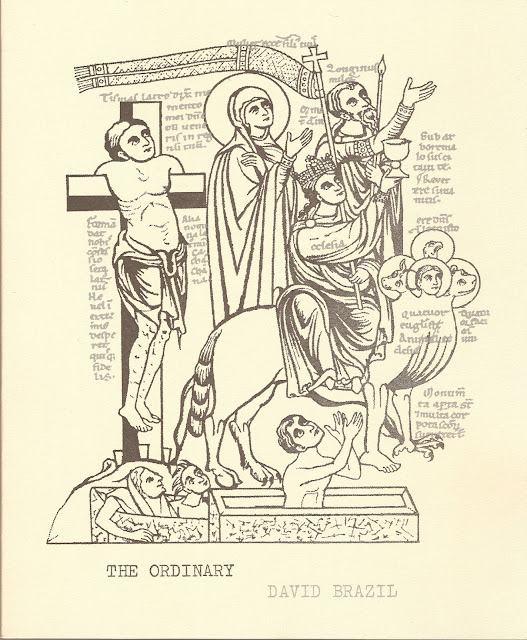 this is the cover, the actual bound-on-the-book-cover, of David Brazil's The Ordinary. I share it with you now to convey the news that Brazil and fellow Compline author Sara Larsen will be heading east, a week from today, to celebrate freedom in NYC. Both are reading at Unnameable Books in Brooklyn (600 Vanderbilt Ave.) on Friday, July 5th at 7pm. If you're in the area, you don't want to miss this...
Posted by The Disinhibitor at 9:42 AM No comments: 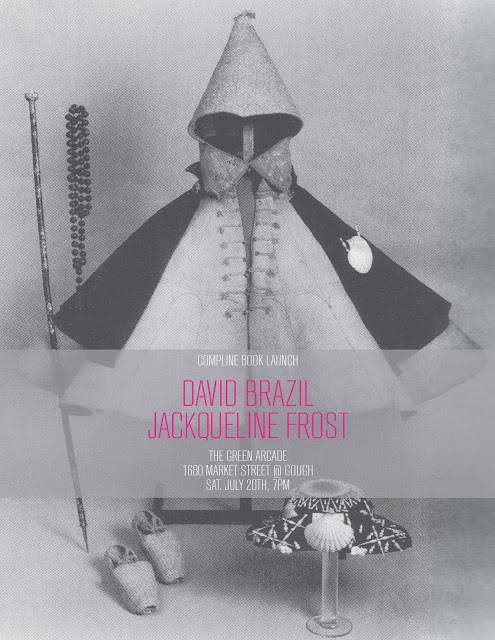 I should have copies of the next two Compline long-players, David Brazil's The Ordinary and Jackqueline Frost's The Antidote, in hand in about two weeks time (maybe even by the end of next week, if all goes well!). I'll package and mail preorders the moment the books arrive (promise!) to ensure that preorders land first! Once the preorders are officially in the world, on doorsteps and in homes, we'll begin the official "launch" with a reading at the Green Arcade on Saturday, July 20th, featuring Brazil and Frost, live and direct (with copies of the new Compline projects, including the Scalapino/Smith, on hand!). The books will land at Small Press Distribution shortly thereafter (though you'll get them from me faster!).
Posted by The Disinhibitor at 12:00 AM No comments: 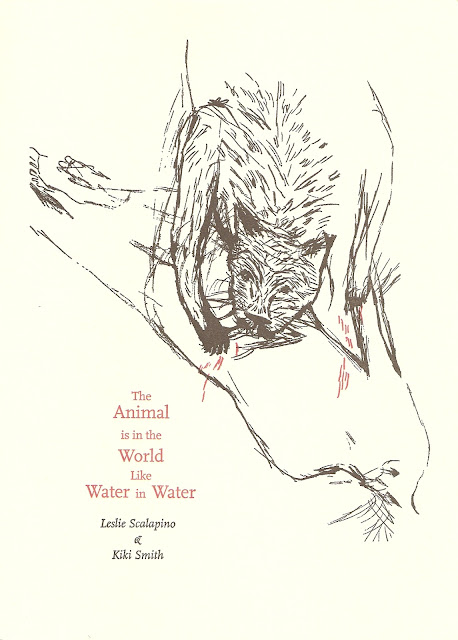 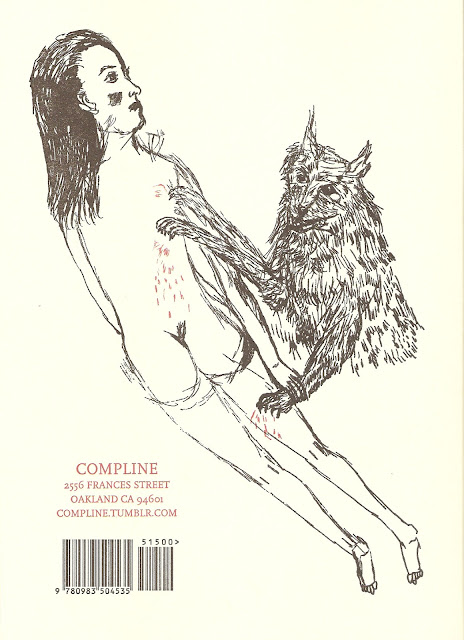 Originally published by Granary Books in 2010 (in an edition of 45 very expensive copies), Compline is pleased to announce the trade edition publication of The Animal is in the World Like Water in Water.

Leslie Scalapino wrote of the collaboration, in her short essay “The Division Between Fact and Experience” (included as an afterward in the Compline edition of the book), “The Animal is in the World Like Water in Water is a collaboration of drawings by Kiki Smith and poetry by Leslie Scalapino (myself)…. Kiki Smith sent me color Xeroxes of a completed sequence, forty-three drawings, which she’d titled, Women Being Eaten by Animals. I wrote the poem using the sense of an unalterable past occurrence: One female, apparently the same girl, is repeatedly, in very similar images as variations, bitten and clawed by a leopard-like, lion-like animal. Both person and animal have abstracted features, giving the impression of innocence or opaqueness. As in a dream of similar actions or a dream of a single, timeless action, the girl flecked with blood while being unaltered by the animal’s touch, there is no representation of motion except stillness of the figures floating in space of page. Neither the girl nor the animal articulate expression, as if phenomena of feeling(s) do not exist...

'The word' in its outside/space refers to and makes a sense of the undoing of social tyranny as undoing of any hierarchy in individuals’ feelings and perception as well as in people’s values (public indistinguishable from private). Without hierarchy, past-reality-future is apparently free paradise of childhood and of birds. This outside space of the word/or that is my words abuts the other visible space of ‘Women being eaten by animals’ (that original title of the visual images denied, however, by the fact that the female figure appears to be almost a child). The visual scene itself is denied by 'not experiencing.' The viewer (while reading beside seeing the images, but also if only seeing the visual images?), has the experience of body and mind being separated as if that is caused by the outside world. This experience of the viewer arises from their sense, in seeing, that one is separated from the scene of the girl and the animal alone together as if making love (and a sense of separation arises from the girl and animal not mimicking expressions of experiencing sensations). The disconnect/that’s itself the dialogue between ‘not being experienced (by the senses)’—and separation or union of mind/eye and body/sight—has to be first enacted by Smith’s visual images, in order for the language to broach this (subject) matter at all. Is dialogue possible without language?”

Leslie Scalapino (July 25, 1944 - May 28, 2010) is the author of thirty books of poetry, prose, inter-genre fiction, plays, and essays. She taught writing for nearly 25 years at various institutions around the country and was the publisher of O Books, which she founded in 1986. Her most recent books are The Dihedrons Gazelle-Dihedrals Zoom (The Post-Apollo Press, 2010), Flow-Winged Crocodile & A Pair/Actions Are Erased/Appear (Chax Press, 2010), Floats Horse-Floats or Horse-Flows (Starcherone Books, 2010), How Phenomena Appear to Unfold (Litmus Press, 2011) and The Animal is in the World Like Water in Water (Compline, 2013).

Kiki Smith was born in Nuremberg, Germany, and grew up in New Jersey. She has exhibited her work since the 1980s, when she was a member of COLAB, an influential artists’ collective in New York City. Her work is represented in museums throughout Europe and the United States. A major retrospective of her prints, “Prints, Books and Things,” took place at the Museum of Modern Art, 2003. The Walker Art Museum organized a major survey retrospective of her oeuvre in 2006. Smith lives and works in New York City.

To purchase a copy, CLICK HERE!
Posted by The Disinhibitor at 12:00 AM No comments: 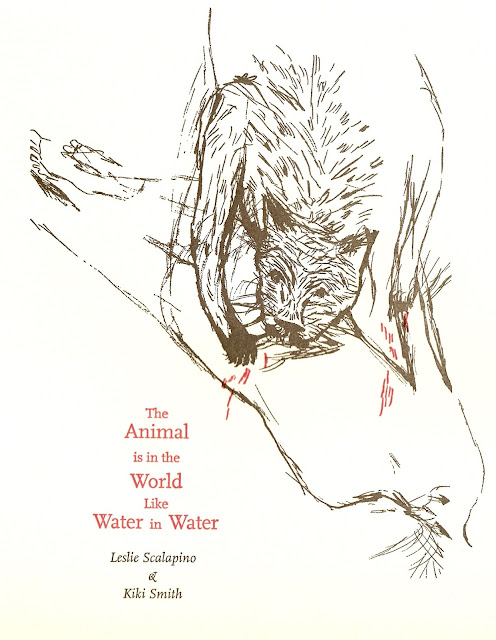 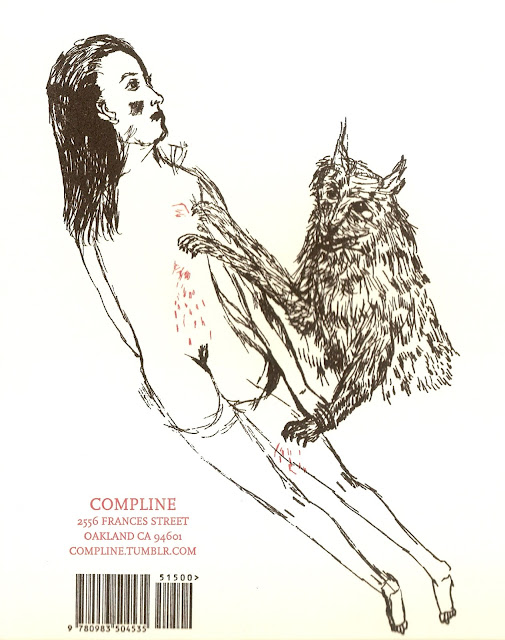 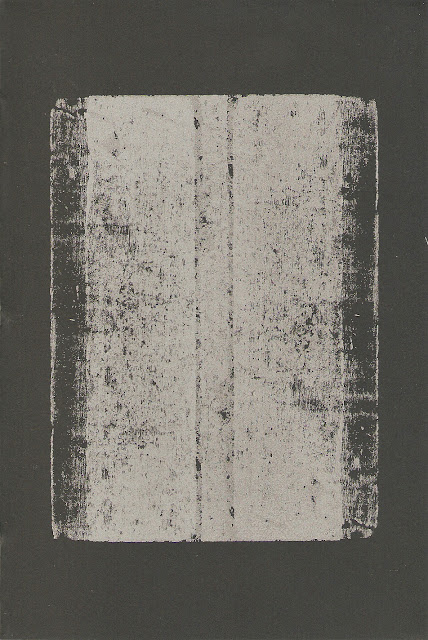 I'm always super impressed by Brian Teare's ability to make his Albion Books look so sophisticated and handsome with so little material in the shop to work with. Here he's printing on furniture, and the texture is totally incredible. This do-si-do book object features two chapbooks in two signatures by two different authors, Elementary Rituals by Rachel Moritz and Dirge by Juliet Patterson, and while I know very little about either author, I've come to implicitly trust Teare's curation (the sign, to me, of a successful press), so I'll be reading this one carefully over the next few days. This is the first in Albion's fifth series of books, followed soon by chapbooks by Frank Sherlock, Jean Valentine, and CAConrad, all of which should arrive by the end of the year. I'll keep you posted, but, for now, go here.
Posted by The Disinhibitor at 12:00 AM No comments: 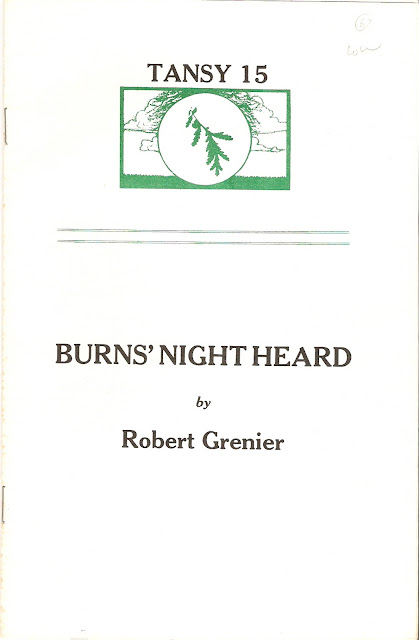 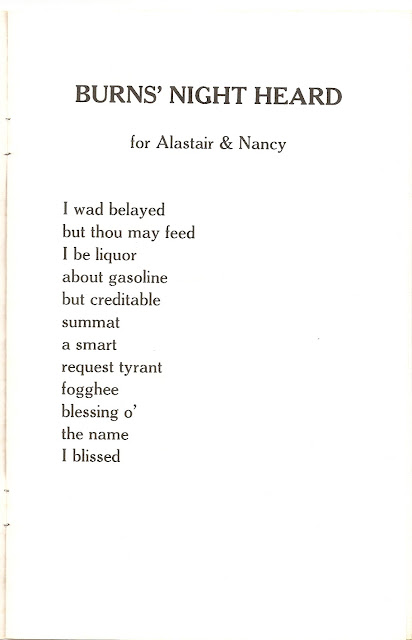 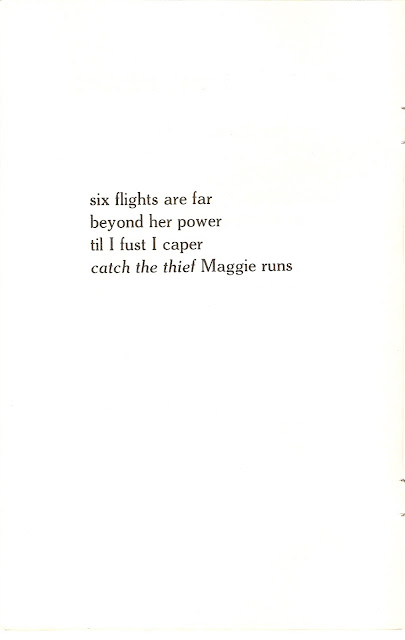 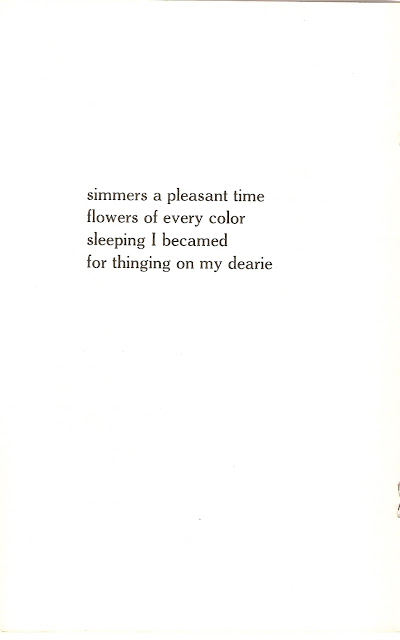 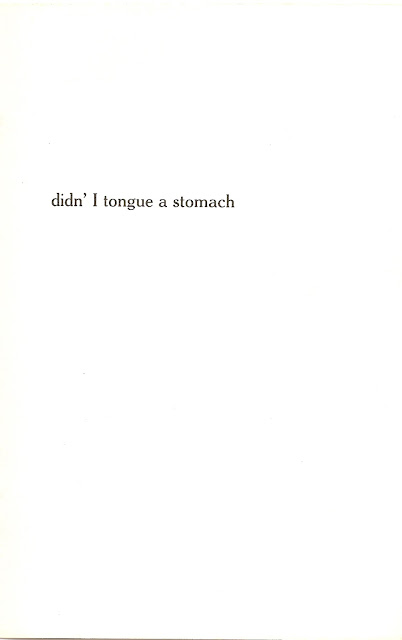 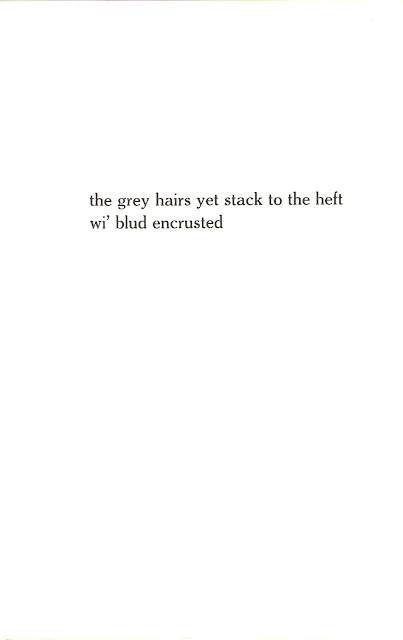 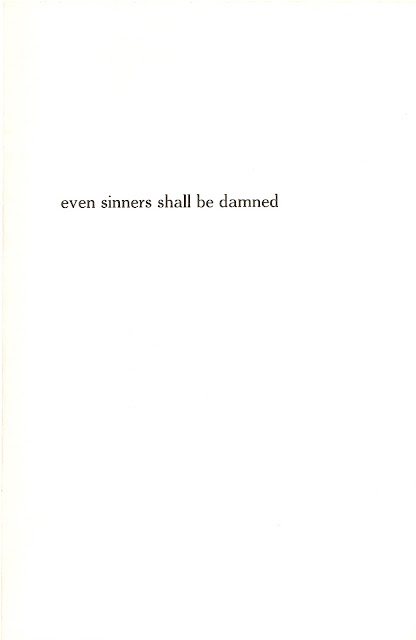 I was super pleased to find one of these in the flesh at Jeff Maser's shop the other day (there are a few left if you're interested...). Published by Tansy Press in April of 1982 (printed by John Moritz? w/ the help of Lee Chapman?), the back blurb reads: Robert Grenier wrote of this piece as "...a sort of visitation by 'Burns' /the spirit of the work so heard through poems read aloud in the Scots on the night of his birth etc. -started me off happily reading R.B. beyond anthologies for the first time. Much more to be said there, but as you like it, space this out."
Posted by The Disinhibitor at 12:18 AM No comments: